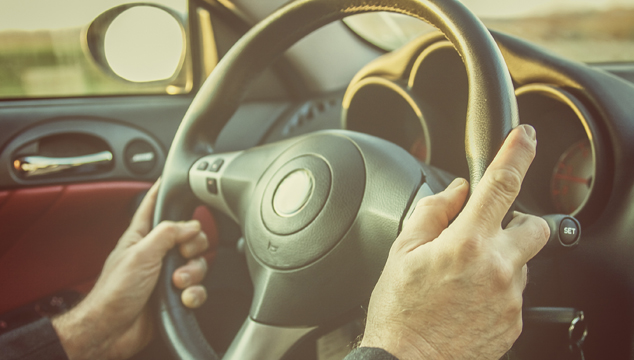 Listen to a story about a car accident I had many years ago!

You’ll also learn how to say the modal verb phrases “should have” and “should not have” in fast, natural spoken English.

I consider myself a good driver. I’ve been driving for over 20 years. I’ve only been in one accident and I’ve only gotten one speeding ticket. Still, I hate making left turns, because I got in an accident once making a left-hand turn. We drive on the right-hand side of the road in North America, so when you make a left turn, you’re driving in front of cars coming in the opposite direction.

Learn more: Use the present perfect to talk about your life experiences

Learn more: How to use I, me, myself, and my

I saw too late that a car had sped up and was trying to beat the red light. I was hit in the middle of the intersection. The car slammed into my passenger-side door. I completed the left-hand turn and pulled over to the side of the road. There was an off-duty police officer in the car behind me who witnessed the accident. I don’t remember who called the police, but an officer arrived at the scene. He explained that both drivers were at fault and he gave both of us tickets. I shouldn’t have tried to rush through the amber light. I should have checked that all the cars had stopped before I started the left turn.

I wasn’t hurt. The other driver wasn’t hurt, either. There was damage to the passenger-side door and it cost me a lot of money to repair the door! I didn’t fight the ticket in court. I paid the fine. Now, I avoid making left-hand turns as much as possible, especially at a busy intersection!

I should have checked that all the cars had stopped

Did you hear the modal verb phrase should have in that sentence? In fast, natural spoken English, should have is pronounced /ʃʊɾəv/.

Should
The modal verb should is only 3 sounds: ʃ ʊ d

The L is silent. Don’t say the L. Should rhymes with good, wood/would, and hood.

Click here to see if your language has the vowel sound [ʊ]: (Wikipedia)

Have
Have, in this phrase, is an auxiliary verb. It’s a helping verb. The main verb is the verb after have.

To make the verb phrase easier to say, should and have are contracted. They form the spoken contraction “should’ve.”

The helping verb have is reduced in this contraction. It becomes the sound /əv/. Yes, it sounds the same as the preposition of. There is no H sound and the vowel sound becomes the reduced vowel schwa sound [ə].

The D is between two vowel sounds, and it’s at the beginning of an unstressed syllable. It becomes the alveolar flap sound. I talk about this sound in a few pronunciation tips, because it’s a common sound in American English.

The T and D consonant sounds have the same mouth position. T is voiceless and D is voiced. However, both become the same alveolar flap sound when they’re at the beginning of an unstressed syllable and between two vowel sounds.

The alveolar flap sound is not a T or a D sound. It’s a quick tongue tap. The tip of your tongue quickly hits or taps the gum ridge behind your top teeth.

Notice that I’m not saying // with a hard D sound.

I should have checked that all the cars had stopped …

In very fast, informal speech, some speakers will shorten have even more and just say the reduced vowel schwa sound [ə]:
/ʃʊɾə/ -or- /ʃʊt̬ə/
Shouldn’t have
Listen to another sentence from the story:

I shouldn’t have tried to rush through the amber light.

Did you hear the modal verb phrase should not have in that sentence? In fast, natural spoken English, shouldn’t have is pronounced /ʃʊdnəv/.

Shouldn’t is a contraction of the words should and not. The contraction ends with the letters D, N, T. I’ve already told you that the D and T have the same mouth position. Both sounds start with the tip of your tongue pressed against the gum ridge behind your top teeth. This is ALSO the starting mouth position for the N consonant sound. The difference is that the N consonant sound is continuous and it comes out of your nose. Try it: [n]

When you say the first part should, don’t finish the D sound. Stop the sound, but keep the tip of your tongue pressed up against the gum ridge behind your top teeth. Without moving your tongue, go straight into the N sound. Listen:

The N and T have the same mouth position, they are both in the unstressed syllable, and the T is followed by a vowel sound. When that happens, American English speakers skip the T sound and go straight into the next sound. The next sound is the reduced form of have.

I shouldn’t have tried …

Again, in very fast, informal speech, some speakers will shorten have even more and just say the reduced vowel schwa sound [ə]:
/ʃʊdnə/

When American English speakers are speaking slowly or when they want to speak clearly, they may say should have or should not have very clearly. It’s not wrong to fully pronounce these modal verb phrases. It’s important that you know all the ways of saying these phrases so that you can hear all the ways of saying them.
Note: the IPA symbol for the alveolar flap is [ɾ]. However, none of the dictionaries for English learners use this symbol, maybe because it looks too much like an r. Some dictionaries do not use any symbol to represent the flap sound. They use use the regular [t] symbol. Other dictionaries use the symbol [ t̬ ]. I have chosen to use both in this pronunciation tip.