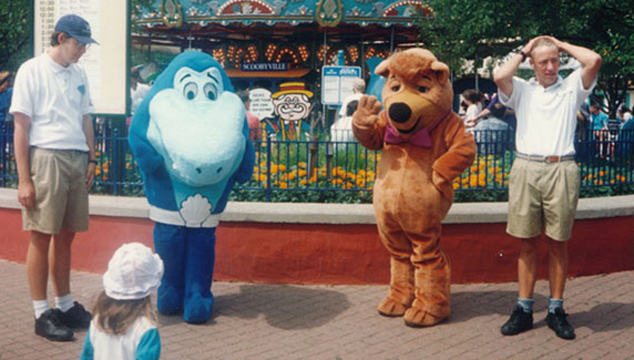 Listen to a story about my first job!

You’ll also learn how how to say the phrase “a lot of.”

Summer is a time when a lot of teenagers have their first jobs. The school year ends in the spring and kids have a couple months off before the next school year begins in the fall. During the school year some kids have an after-school job a couple nights a week and on weekends, but in the summer, kids can work longer hours. A summer job is a way to earn spending money and get experience.

I didn’t have my first job until I was 17. I worked as a character at an amusement park outside of Toronto for the summer. I had done some babysitting and I’d had a paper route before that, but this was my first real job. I didn’t make a ton of money because I was under 18, so I didn’t even qualify for minimum wage. I made the student minimum wage, which at that time was something like $6.50 an hour.

I worked in the children’s area of the park, where the rides and characters were based on American cartoons. I was a shark. It was the best job I’ve ever had. I spent my time hugging children, posing for photos and signing autographs as my character. I also got free entry to the park on my days off and free tickets for my family & friends. It was a fun way to spend a summer!

I’ve had a number of jobs since then, but my first job is still my favorite job! I enjoyed the 5 years I spent as a tour guide in Europe, and I’ve enjoyed the 9 years I’ve been teaching English, but nothing compares to being young in the summer and working at an amusement park! If I could do it all over again, I would!

HOW TO SAY THE PHRASE “A LOT OF“

Summer is a time when a lot of teenagers have their first jobs.

Did you hear the words a lot of in that sentence? In fast, natural spoken English, the three words together are said /əˈlɑɾəv/ -or- /əˈlɑt̬əv/.

The phrase a lot of means a large amount of something. Let’s look at how to pronounce each word individually and how to say them together.

Lot is the stressed word in this phrase. It’s said louder and longer than the other words.

When the T is between two vowel sounds and at the beginning of an unstressed syllable, it becomes the tapped T or alveolar flap sound. It’s not a T or a D sound. It’s quick tongue tap. There is no stop or pause in the middle of the sound.

The preposition of is also sometimes reduced to the sound [ə], so you may also hear a lot of pronounced /əˈlɑt̬ə/ with no V consonant at the end: /əˈlɑɾə/ -or- /əˈlɑt̬ə/

In the story, I also used a synonym of a lot of. Listen to another sentence from the story:

I didn’t make a ton of money …

The phrase a ton of also means a large amount of something, but it’s more informal than a lot of.

It’s the same vowel sound [ə] in all three syllables.

It can also be pronounced /əˈtənə/ with no V sound at the end.