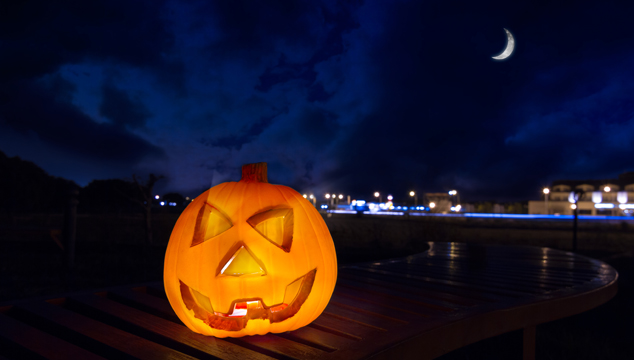 Listen to a story about Halloween!

I really enjoy Halloween. I’m too old to go trick-or-treating, but I love seeing all the kids in their costumes, especially the really young kids who are trick-or-treating for the first time. I love how the entire neighborhood gets involved. My parents still give out candy every year, even though their own kids stopped trick-or-treating more than 25 years ago!

Learn more: Episode 17: How to say the reduced form of “or” in trick-or-treating

We count the number of kids that come to the door on Halloween, because that helps us know how many kids to expect next year and how much candy to buy next time. Two years ago, only 18 kids came to our door. Eighteen! That’s the lowest number of kids we’ve ever had on Halloween. We lived in an older neighborhood and there weren’t a lot of children, but I knew there were more than 18!

Learn more: The Story of Halloween

There were 3 possible reasons why we had so few kids. Our neighbors on either side of our house were party poopers and didn’t participate in Halloween. They turned off all the lights inside and outside and pretended they weren’t home. We had landscaping in our front yard and there was a large plant that blocked the view of the front door from the street. And, we didn’t have a sidewalk on our side of the street. The sidewalk was on the other side. Maybe kids couldn’t tell if we were home and decided it wasn’t worth it to cross the street.

Learn more: Episode 12: How to say the reduced form of “our”

The next year, I came up with the perfect solution. I handed out candy from our garage. Everyone could see me and know it was worth it to cross the street to get some candy. I played Halloween music and I wore my Minnie Mouse ears [photo], and I got to see so many kids in their costumes. We had 50 kids, which was a big increase over the previous year! It was a fun Halloween.

Learn more: English Grammar: When NOT to use “the” (definite article)

HOW TO LINK THE AMERICAN T SOUND

In episode 24, I talked about the American T sound called the alveolar flap (or tap) that occurs in words like photo, or city.

Learn more: Episode 24: How to pronounce the alveolar flap (the American T sound)

It’s not a fully pronounced T sound, but it’s not a D sound either.

The tip of your tongue quickly taps, or hits, the gum ridge behind your top teeth.

In episode 13, I talked about linking a consonant sound to a vowel sound.

Learn more: Episode 13: Linking a consonant to a vowel sound

In spoken English, words are connected so that there is no pause between the words. When one word ends with a consonant sound and the next word begins with a vowel sound, the sounds are linked and the consonant sound becomes the first sound of the next syllable.

Listen to part of a sentence from the story:

… but I love seeing all the kids in their costumes, …

I linked the conjunction but with the pronoun I. When I linked them, the T at the end of but became the alveolar flap sound (or the tapped T sound), because:

This alveolar flap linking occurs again in the story. Listen to part of a sentence from the story:

I linked the word lot with the preposition of.

The alveolar flap or tapped T sound is very common in American English. It’s important to know how to pronounce the sounds, and it’s important to be able to hear the sound so you can understand natural spoken English

Remember: This pronunciation tip is a guideline, not a “rule.” Americans don’t always link the alveolar flap. Sometimes they will pronounce the T at the end of but as a regular T, especially if they are speaking slowly or trying to speak clearly when they are giving a presentation.

Learn more:
English Grammar: “If you could … ?” (2nd conditional question)
English Vocabulary: How to use the verbs “wear” and “dress”