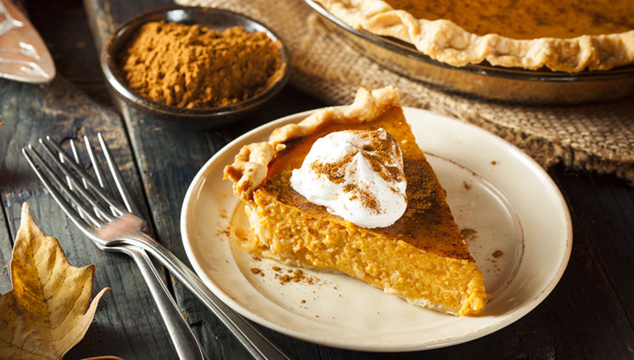 Listen to a story about a dilemma I had at Thanksgiving dinner this year!

You’ll also learn how to hear and make the reduced form of the preposition “of.”

Every year on the 2nd Monday in October, Canadians celebrate Thanksgiving. This is not to be confused with the American Thanksgiving, which happens in November. Thanksgiving began as a special day to thank God at the end of the harvest, when the farmers had finished collecting all the crops from their fields. Even though most Canadians aren’t farmers anymore, Thanksgiving is still an important holiday. We celebrate the day with a big family dinner.

We had our family over for dinner on the Sunday so everyone could relax on the Monday before they had to go back to work. The house was full of fun and lively conversations. There were 9 of us around the dining room table. I don’t know how my mother cooks such a large meal. Every year, she makes such a delicious dinner! We had turkey with stuffing, gravy and cranberry sauce, as well as fall vegetables like potatoes, squash, turnip, and carrots.

I had a real dilemma this year! Everyone who came to dinner brought a dessert: We had cupcakes, 3 different kinds of pie and an apple dessert! Dessert is my favourite part of the meal. How could I possibly eat dinner AND all the desserts? Do I eat a big dinner and choose only one dessert? Or do I eat a little less at dinner, so I can save room for more of the desserts? This was my dilemma.

In the end, I compromised. I ate some turkey and vegetables, but not too much. I attempted to eat a little bit of all the desserts, but I only had room for 1 cupcake, some apple crisp and a slice of pie. We put one of the pies in the freezer to save it for later, and during the week after Thanksgiving we ate one of the other pies.

I was so full after dinner, but it was a very happy Thanksgiving!

HOW TO HEAR AND SAY THE REDUCED FORM OF THE PREPOSITION OF IN FAST, NATURAL SPOKEN ENGLISH

Did you hear the word of in those phrases?

Of is a preposition. It’s a function word so it’s unstressed in a sentence. It’s reduced to just the sound /ə/ before a consonant sound.

Instead of one of the pies, you’ll hear
/wʌnə/
/wʌnə/ the pies

NOTE: This is why you will sometimes see native speakers write a slice a pie or kinda. They say [ə] and forget that the sound actually represents of.