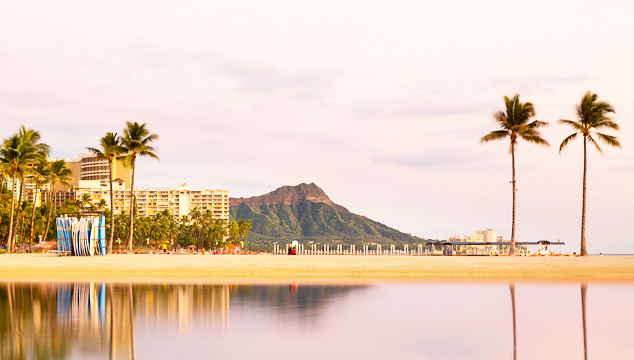 I’ve put so and too together in this lesson because I have heard so many English learners confuse them! Why do the smallest words always cause the most trouble?

In this lesson we will focus on so and too as adverbs and as intensifiers.

The photo above is of Waikiki, Hawaii. What adjectives do you think of when you look at this photo? I think of the adjectives beautiful, peaceful, expensive, and far.

You can use the adverbs so and too to intensify these adjectives. Intensify means become greater, stronger, or more intense.

So is used like very or extremely. It’s another way of saying to a great degree.

Hawaii is so beautiful! It’s so peaceful, but it’s so far and so expensive.

Too has the opposite meaning. Too means more than needed, more than necessary, or more than enough. Too is a negative expression.

“I love Hawaii, but it’s too far and too expensive.”

Did you notice that I didn’t say or ? Too is not usually used with positive adjectives.

Remember that adverbs can also be used to describe other adverbs, too, not just adjectives!

In this lesson we will also look at when to use such, so much, so many, too much and too many.

1. So is used BEFORE an adjective or adverb.

So + adjective/ adverb (no noun)

She is so skinny.

Her new boyfriend is so handsome.

Don’t be so naïve!

He drives so fast.

Her new outfit is so lovely.

The cake she made for my birthday is so beautiful!

This movie is so long.

It was so good to talk to you today!

When did he get so fat?

2. So CANNOT be used before an adjective + noun

Instead, before a noun use such. (Remember that the article goes before the adjective.)

She is such a beautiful woman!

I love my new boyfriend. He’s such a great person!

You live in such a nice neighbourhood.

He is such a great singer!

We had such a great day today! The weather was so nice.

He tells such awful jokes.

I love listening to them sing. They have such beautiful voices!

3. So much and so many can be used when you want a stronger way of saying a lot!

With an uncountable noun, use so much:

so much + uncountable noun

I have so much studying to do before the test tomorrow!

Have you ever seen so much food?

There is so much work to be done before the house is clean!

What a great day for skiing! There is so much snow!

So much to do, so little time!

With a plural noun, use so many:

so many + plural noun

I’ve never seen so many people in one place!

It was a great party last night. I met so many new people!

She’s really popular. She has so many friends!

There are so many cards to choose from.

I took so many pictures when I was on vacation!

So many books to read, so little time!

4. Special sentence structure with so:

This sentence structure is used to talk about a result in the that-clause that occurs because of so + adjective. That can be left out of the sentence.

The children were so quiet (that) I didn’t even know they were in the room!

The cake was so good (that) we couldn’t stop eating it!

She looks so different (that) I hardly recognize her!

We got to the station so late we missed the train!

Adverbs can also be used in this sentence structure:

She ran so fast she won the race!

Such, so many and so much can all be used in this sentence structure:

It was such a good book (that) I couldn’t put it down.

I read so many books last year (that) I can’t remember them all!

I have so much studying to do (that) I won’t be able to go to the party tonight!

1. Like so, too is used BEFORE an adjective or adverb with NO noun.

Too + adjective / adverb (no noun)

We don’t see her very often. She lives too far away.

Turn the music down. It’s too loud!

She drives too fast.

Don’t stay out too late. You have to get up early tomorrow!

She tried memorizing the textbook the night before the exam, but it was too little, too late.

2. However, in two situations, too can be used in a positive statement:

You are too funny!

This actually means “You are so funny!” or “You are very funny!”

You are too kind!

3. Sometimes the intensifiers way, far, or much can be added in front of too:

These pants are way too big on me.

She is way too skinny!

She is far too young to be wearing that kind of outfit!

It’s much too late to do anything about global warming.
(This is different from too much!)

4. Too CANNOT be used before an adjective + noun

5. There is no similar word as such to use before adjective + noun

6. Too much and too many have a similar meaning as too.

With an uncountable noun, use too much:

too much + uncountable noun

I feel sick. I drank too much (alcohol) last night!

I ate too much chocolate.

It takes up too much time.

If he has that much time to play video games, then he has way too much time on his hands!

She was a famous singer by the time she was 15! The fame was too much, too soon.

Sometimes students say to me, “Teacher, I love your class too much!” This is NOT a good thing to say! Too much is a negative expression. It’s better to say, “I like your class a lot” or “I really like your class!”

With a plural noun, use too many:

too many + plural noun

Is it possible to have too many friends?

She’s fooled me one too many times.

How many TVs are too many?

There are way too many cars on the road.

My son is so spoiled. He has far too many toys!

I’m being pulled in too many directions!

7. Special sentence structure with too:

too + adjective + infintive (to do something)

This structure is used to explain why someone can’t do something.

I’m too tired to go out tonight.

This soup is too hot to eat.

She is too young to drive a car!

This box is too heavy to carry.

We’re far too young to get married.

It’s too dangerous to walk around this neighbourhood at night.

There’s no use getting upset. It’s too late to do anything about it now.

It’s too good to be true!

I can’t go to her party tonight, I have too much work to do!

The house was too expensive to buy.

Her offer was too good to refuse.

Adverbs can also be used:

She drove too slowly to arrive on time.

We got home too late to see the beginning of the TV show.

Too many and too much can also be used:

There were too many people at the picnic to count.

I had too much work to do yesterday.

8. Another special sentence structure with too:

too + adjective + for someone/something (+ infinitive)

This sweater is too big for me to wear.

We can’t go on this roller coaster. Alice is too short for this ride!

This box is too heavy for me to carry.

Do you have more questions about so and too as adverbs and intensifiers? Let me know in the comments below!