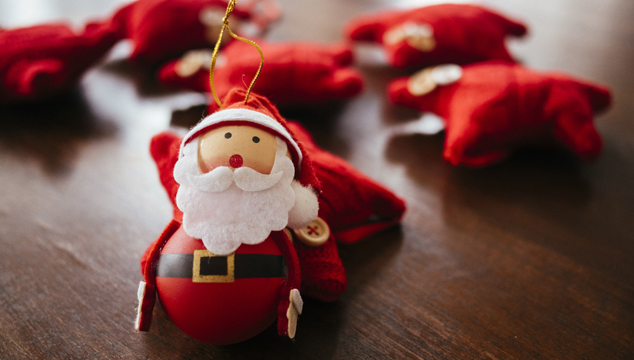 Santa goes by many names – Santa Claus, St. Nick, Kris Kringle, or Father Christmas. He lives at the North Pole, where he also has a toy workshop. He keeps an eye on children around the world and he knows if they’ve been naughty or nice! Just before Christmas, children can write letters to Santa asking for specific toys for Christmas. On Christmas Eve, Santa loads up his sleigh with a sack full of toys. His sleigh is pulled by 9 reindeer (including Rudolph with his bright red nose!) and he flies through the air from rooftop to rooftop to deliver all the toys. At each house he quietly slides down the chimney and puts the gifts under the Christmas Tree before going back up the chimney and on to the next house!

If Christmas is about celebrating the birth of Christ (as I explained in another article), how did this legend of Santa develop at the same time? To discover the answer to this question, we must take a trip through time, because he is a combination of many different historical characters…

Let’s start by taking a look at St. Nicholas. Nicholas lived over 1600 years ago in a town called Mira (an ancient town in what is now Turkey). He was orphaned at a young age and used the inheritance his parents left him to help people in need. He was a kind, selfless and generous man who dedicated his life to serving God and was later made a Bishop. He often went out at nights taking presents to the needy, especially children, paying special attention to orphans. He died on Dec 6th, 343 A.D. All over Europe, Dec 6th is still celebrated as St. Nicholas Day. On St. Nicholas Eve (Dec 5th), St. Nicholas still leaves small treats for children in their shoes! This is where the tradition of giving gifts to children near Christmas began.

The Dutch called St. Nicholas Sinterklaas [klaas is short for Niklaas]. When the Dutch immigrated to North America, they brought their customs and traditions with them – including celebrating St. Nicholas Eve. Sinterklaas was difficult for English speakers to pronounce, so it came out sounding like Santa Claus instead!

In the 16th century, during the Protestant Reformation in Germany, Martin Luther (who led the Reformation) did not like the continued popularity of St. Nicholas, especially so close to Christmas. He thought that focusing on St. Nicholas distracted people from the real purpose of Christmas – celebrating the birth of Christ. He introduced the character of Christkindl (or ‘Christ child’) to replace St. Nicholas. The Christkindl was portrayed a young child with blond hair, wearing a golden crown and angel wings, who would bring gifts to children at Christmas time. When this European tradition was brought to America, the English pronunciation became Kris Kringle, now another name for Santa Claus.

After the Reformation, England went a step further and banned Christmas completely! People focused on their family and children at Christmas instead of a religious figure. Father Christmas became the personification of Christmas. He was portrayed as a tall thin man who celebrated by eating a lot, drinking, and generally having fun around the time of the Winter Solstice (Dec 21st) and Christmas. Though he was a replacement for St. Nicholas, he was not a religious figure and until the end of the 19th century he had nothing to do with giving gifts to children!

By the 19th century, all these European traditions were brought to North America and mixed together to create both religious and non-religious traditions at Christmas. Eventually, Santa Claus developed into a uniquely American character!

In 1832, Clement Moore wrote a poem called A Visit From Saint Nicholas. It is more commonly known by its first verse “‘Twas the night before Christmas. . .” This poem contributed greatly to the legend of Santa in North America! In the poem, for the first time Santa (St. Nick) was described as travelling on Christmas Eve in a sleigh pulled by reindeer that flew from rooftop to rooftop. He carried a sack full of toys and he slid down the chimney to put the toys under the Christmas tree. He was described as a chubby and plump jolly old elf with a white beard, and all dressed in fur – he wasn’t wearing a red suit yet!

Inspired by Clement Moore’s poem, the political cartoonist Thomas Nast drew the first picture of Santa as we know him today in 1863 for the cover of a magazine called Harper’s Weekly. The first cartoon showed Santa just as Moore described him: a plump little elf with a beard, sitting in a sleigh pulled by eight reindeer. Like Moore, Nast also embellished the legend of Santa with new details. He drew Santa sitting in a toy workshop at the North Pole. He showed Santa with a list of all the good and bad children around the world (and Santa always knows if children are naughty or nice because he watches them throughout the year!) It was Nast who put Santa in a red suit and who suggested the idea of leaving a snack out for Santa! His cartoons of Santa were so popular he continued to draw Santa for next 30 years.

By the early 1900s, a distinctly North American Santa had emerged. Most people believe our modern idea of Santa came from Coca-Cola advertisements, but this is not true! It is a myth promoted by Coca-Cola. Before the Coca-Cola advertising campaign of 1931 depicting Santa, other images of Santa as imagined by Moore and Nast spread widely. The White Rock Beverages Company used Santa in their ads beginning in 1915. Norman Rockwell drew pictures of Santa in his red suit for the Saturday Evening Post. Beginning in 1931 and continuing for the next 30 years, Coca-Cola used Santa in their advertisements and Christmas. These ads were widely seen in magazines and then later on T.V.

Santa’s 9th reindeer – Rudolph – was introduced in 1939. Robert May wrote the poem Rudolph the Red-Nosed Reindeer when he worked for the American department store Montgomery Ward. He was asked to create a poem to be given away to children at Christmas, so he created a story about a reindeer with an unusually bright, red-colored nose who was asked by Santa to guide his sleigh through bad weather. It was later adapted into a song that is now a popular Christmas carol!

From St. Nicholas to advertising campaigns for drinks, that is how Santa came to play such an important role at Christmas!