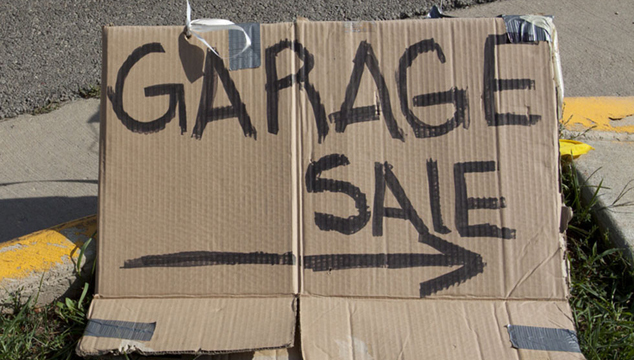 Listen to a story about a couple garages sales I had this summer!

You’ll also learn how to hear the difference between “can” and “can’t.”

How do you get rid of things you don’t want anymore? You can sell them on the internet, you can give them to family or friends, you can donate them to charity, or you can have a garage sale. A garage sale is an event held in the driveway of a home, usually on a Saturday morning, where people sell things that they don’t need anymore. This kind of shopping is a popular hobby. Some people look for specific things, like baby clothes or electronics. Other people just like to browse. You never know what you’re going to find at a garage sale!

I held my first garage sale in the summer of 2011. It was somewhat of a success. I made good money, but I got so annoyed with people. I didn’t have a problem with people trying to bargain and get a good deal. That’s what people do at garage sales! Here’s what annoyed me: I priced an item at $5. A woman offered me $4 for it & I accepted her offer. Then she gave me a $5 bill & I had to give her change. If she had a $5 bill, why didn’t she just pay $5 for the item? It was a small thing, but it really bothered me.

I decided to have another garage sale in September 2013. This time, I priced things at odd amounts, like $7, so that a buyer could give me a $5 bill and still feel like he got a good deal. It was raining the day of the garage sale, not pouring rain, but enough that I had to keep everything in the garage. I wanted to put signs up around the neighborhood advertising our garage sale, but the rain would have destroyed them. I had put an ad in the local paper, so people still came even though it was raining! I made more money at this garage sale than at the one I had in 2011!

Garage sales are fun. They usually happen from late spring to early fall in Canada. The weather is beautiful during that time, so it’s a nice way to spend a Saturday morning. I enjoy talking to all the different people who come to garage sales. You don’t become rich from a garage sale, but it’s a nice way to earn some pocket money. Anything that doesn’t sell, I donate to charity.

Listen carefully to these two sentences. Can you hear the difference?

Can you hear the difference between can and can’t in natural spoken English? It’s not the T at the end of can’t that’s the difference, it’s the way that can is pronounced.

The modal verb can is a function word, so it’s not stressed in a sentence. It’s not fully pronounced. It’s said very quickly, and the vowel is reduced to the schwa sound /ə/. Can is pronounced /kən/ in natural spoken English.

Listen again, and try to imitate the sound I make: /kən/

Can’t is NOT a function word. It’s a stressed word in a sentence, so it’s always fully pronounced.

Listen to another pair of sentences:

Can you hear me?
I can’t hear you.

Can is not reduced at the end of a sentence. If it’s the last word in a thought group or a sentence, it’s fully pronounced, for example:

I don’t think I can

Listen to the story again, so you can get used to hearing the reduced form of can.