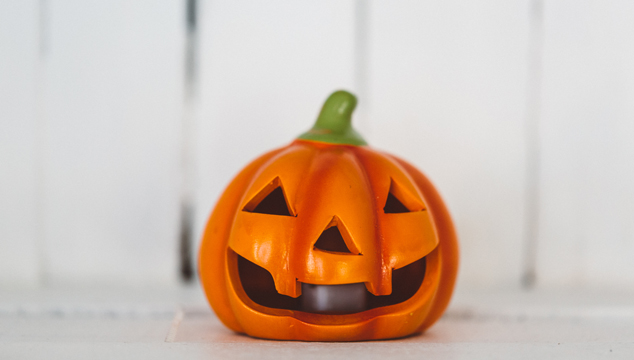 Halloween is a community event. It’s a combination of an ancient pagan festival from northern Europe and a religious holiday created by Christians in ancient Rome, but its name comes from Scotland. Now it’s a day when children wear costumes and get free candy!

On October 31, kids put on costumes and go door-to-door in their neighborhood. They ring doorbells and shout “trick or treat,” and their neighbors give them candy. Lots of candy! It’s the best night of the year!

Halloween is not just a day. Nowadays it is a season that starts in late September. Stores sell big boxes of candies and all kinds of decorations for your house. TV channels play Halloween movies every night for days before Halloween. Children wear their costumes to school and have a Halloween parade. A pet store even has a costume party for pets!

Halloween is not a religious holiday, but it sort of started that way. You must remember that in the northern hemisphere it gets dark very early in the evening at the end of October, usually around 6pm, and it’s dark for almost 12 hours until sunrise the next morning.

Have you heard of the Celts? They were a group of people who lived in the UK and northwestern France more than 2000 years ago. They celebrated a festival called Samhain. It was a celebration of the end of summer and the harvest, and the start of their new year.

The Celts believed that on the night before Samhain, the ghosts of dead people returned. (Remember, this was before Christianity began.) People were afraid of this night! They would put on masks and costumes hoping that ghosts would not recognize them, or think that they are also ghosts. Today, ghosts, skeletons, zombies, mummies, tombstones and other spooky things connected to death are still popular costumes and decorations on Halloween.

People were worried about evil spirits (creatures that you can’t see but who have special powers) walking around during the night before Samhain so they tried to scare the spirits away from their houses by carving a scary faces into special kinds of large, round vegetables, like rutabagas. (They didn’t have pumpkins. Pumpkins are from North America.) They put a candle inside for light and put the vegetables in the windows of their homes. Today we carve all kinds of fun and scary faces into pumpkins on Halloween!

Eventually, the Romans, from what is now Italy, took over parts of northern Europe, and the Romans brought back some of the traditions of Samhain and added them to Roman celebrations in fall. In the 7th century, the Catholic Pope wanted to replace old Celtic and Roman pagan festivals with religious holidays. November 1st became All Saints’ Day. It was a day to honor Catholic saints. Today, angels and devils are popular costumes at Halloween.

In Old English, saints or holy people were called hallows, so All Saints’ Day was also called All Hallows’ Day or All Hallows’ Mass. (Mass in Old English was a religious ceremony. Today the word Mass is the name for the Sunday morning ceremony in a Catholic Church.) This was shortened to Hallowmas. In Old English, the end of the day was called even, so the night before Hallowmas was called All Hallows’ Even or Hallowmas Even. In Scotland, even was shortened to e’en, so it became Hallowmas e’en. From that, we got the word Hallowe’en, more commonly spelled Halloween.

Halloween became more popular because of the poem Halloween by Scottish poet Robbie Burns published in 1785. In the poem, he describes the things kids did on Halloween in his part of Scotland. (It’s a difficult poem to understand even for native speakers because it is written in Old Scottish English.)

Scottish kids would go out guising on Halloween. (Guising is like the word disguise but without the dis-). Scottish kids would disguise themselves with old clothes and things they found around their house. They would walk around the neighbourhood and knock on their neighbors’ doors. They would sing a song, say a poem or do a short dance, and the neighbors would give them a treat, like apples, nuts or sweets! Today, most children buy their costumes in a store, they don’t have to do tricks anymore, and the treats are small chocolate bars or small bags of chips, but kids still go trick-or-treating on Halloween!

All of these traditions were brought to Canada and the US by European immigrants.

And that, my friends, is the story of Halloween.

Do you have any fun days that you celebrate in your country?