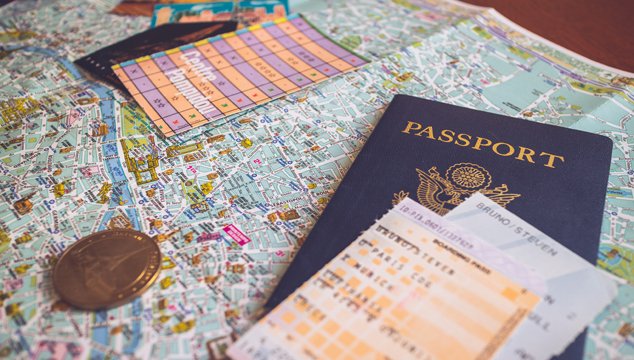 Listen to a story about a problem I had with my passport!

You’ll also learn how to say and hear the words “used to” in fast, natural spoken English.

I used to work as a tour guide in Europe. For five summers starting in 2002, I led tours all over Europe. I crossed a lot of borders during that time, so I had a lot of entry and exit stamps in my passport plus a few visas. By the middle of 2005, my passport was full and there was no room for more stamps. I went to the Canadian embassy in London to apply for a new passport. It was going to take too long to get a new passport and I couldn’t wait because I only had a few days before my next tour. The woman at the embassy added extra pages to my passport and told me to get a new one when I was back in Canada.

Learn more: How to use “used to”

I flew home a few weeks later. I arrived at the Toronto airport and went to customs & immigration as usual. The border agent didn’t say anything while he looked at my passport, but I don’t think he had ever seen a passport full of stamps with extra pages in it. He made a mark on my declaration card, but the agents always do that, so I didn’t think anything of it. Before I could leave the customs and immigration area to go get my bags, I had to hand my card to another agent, and that was when I discovered the mark on my card meant something.It meant that I had to go to the immigration office, where they decide who gets into the country and who doesn’t.

Learn more: How to talk about transportation

I didn’t know why I was there, and that made me nervous. The immigration officer didn’t say anything while he was looking through my passport. I guess he just wanted to make sure it was legitimate. He started asking me questions about Canada and my life, but the questions were hard and I couldn’t answer some of them! I started panicking thinking I wasn’t going to be allowed into the country! He ended the investigation with an easy question that I could answer, and then he smiled and told me to go get a new passport.

HOW TO HEAR AND SAY USED TO IN FAST, NATURAL SPOKEN ENGLISH

In the first sentence in the story, I used the verb “used to.” Listen to the sentence:

I used to work as a tour guide in Europe.

Did you hear the words used or to in that sentence?

There are four things that you need to know to hear used to in a spoken English.

This is a different verb than the verb use, even though they are spelled the same.

The -ed at the end of used is pronounced with a T sound.

The preposition to is a function word. It’s a grammar word. It needs to be in the sentence to make the sentence grammatically correct, but it’s not an important word. In fast, natural speech, the vowel in to is reduced to the sound /ə/. That sound is called the schwa and it’s the vowel sound in reduced syllables.

The preposition to is pronounced /tə/.

In fast, natural speech, used to is pronounced /ˈjustə/

Listen to the first part of the sentence again:

Learn more: Episode 10: The reduced pronunciation of the preposition to