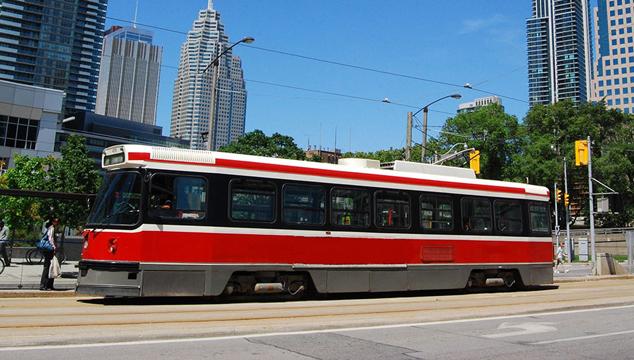 Listen to a story about the world bus ride I have ever had!

You’ll also learn when to drop the h sound at the beginning of the pronouns “him,” “his,” and “he.”

On a recent Friday night, I went downtown Toronto for a night out with friends. I really don’t like driving downtown. There’s so much traffic crowded into a very small space, and parking is so expensive! I decided to take the bus instead. There’s an express bus from my suburb that will take me straight downtown without stopping. The buses are really nice and the seats are really comfortable. I thought it would be more relaxing and less stressful than driving, but I was wrong!

On that Friday night there were tons of people heading downtown, so the bus was packed. My friend and I couldn’t get 2 seats together, so we had to sit on opposite sides of the aisle. I had the great misfortune to sit next to a complete stranger who insisted on telling me his entire life story … for 45 minutes! I didn’t want to be rude to him, but I really didn’t feel like talking to him. I just wanted to rest & relax. I tried to ignore him and look uninterested, but that didn’t work. He just kept talking. It sounded like he had a really sad life. At the end of the bus trip, he asked me to go out with him and then he tried to give me his phone number. What was he thinking? I don’t think he was all that bright.

To make things worse, the bus was so packed that people were standing in the aisle and sitting on the aisle floor. There was a guy sitting on the floor next to me who had not showered for days. Not only did he smell of B.O., but he started eating the smelliest crackers ever. He ate the entire package. It was disgusting.

You know, I think I would have been better off driving downtown instead of taking the bus!

WHEN TO DROP THE H SOUND AT THE BEGINNING OF THE PRONOUNS HIM, HIS, and HE.

In the story, I used the pronouns he, him, and his frequently. Did you notice that I didn’t fully pronounce them?

Listen carefully:
I tried to ignore him…
I don’t think he was all that bright.
What was he thinking?

Pronouns are functions words. They’re grammar words. They need to be there for the sentence to be grammatically correct, but they’re not important words. Function words are not fully pronounced in a sentence.

When any pronoun with h is in the middle of the sentence (and NOT at the beginning), you don’t need to pronounce the h. You can drop the h, and then link the pronoun to the previous consonant sound.

Listen to the story again. Can you hear more examples of pronouns without the h sound?