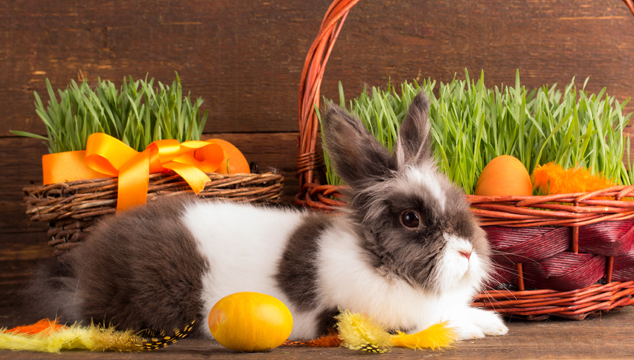 Easter is both a religious and secular holiday. The religious holiday celebrates the resurrection of Jesus Christ, while the secular part is a mixture of European traditions celebrating the beginning of spring and modern North American customs. This is the long and confusing story about why and how we celebrate both Jesus and a bunny at Easter.

In Christianity, Easter is one of the most important days of the year. In many Catholic countries, Easter is more important than Christmas.

Jesus had returned to Jerusalem to observe the Jewish celebration of Passover. He ate the Passover meal with his disciples at what is now called the Last Supper. In English movies and TV shows, you may have heard the words disciples or apostles. During Jesus’ lifetime, a small group of 12 men were his closest followers and were called Jesus’ disciples. After Jesus’ death, these disciples became apostles. They were the men who traveled and taught more people about Jesus.

The religious leaders at that time saw Jesus as a threat. After the Last Supper, Jesus was arrested by the authorities. They believed he claimed to be King of the Jews, and he therefore he was also guilty of starting a rebellion against the Emperor. The punishment for this was crucifixion. He was tried and convicted, and then sentenced to death. On Good Friday, Christians remember the crucifixion of Jesus, when Jesus was nailed to the cross and left to die. Easter Sunday celebrates the resurrection of Jesus Christ, the day when God brought Jesus back to life.

In non-English speaking Christian countries, for example France, Italy, and Spain, the word for Easter comes from the Greek word Pascha used for the Jewish Passover.

In 325 AD (Anno Domini = in the year of our Lord, it counts the years after Jesus’ death) a large group of Christian bishops decided that Easter would always be on the 1st Sunday after the first full moon of spring. This means that the date of Easter changes every year. It’s not a fixed date like Christmas, which is always on December 25th.

The English name Easter, however, actually comes from an ancient German pagan goddess.

An 8th century British monk named Bede wrote a book about early forms of calendars and how to determine the date of Easter (because it was very hard to determine when the first full moon of spring was!) He said that one of the months in the early German calendar was named after the goddess Eostre because that was the month in which she was celebrated. However, this is the only mention of Eostre in history. There is no other proof that early Germans worshipped her. Her name does not appear in any history books before then, and there are no images in artwork of Eostre before Bede mentioned her.

Bede may have been confused. Eosturmonath (the name of the month) corresponds to the start of spring in Germany, the modern month of April. The months of the early German calendar we named after agricultural or weather events, so Eosturmonath may have been a similar word for spring.

Nevertheless, Easter became the English word for this celebration.

The Easter bunny arrived in Canada and America with German immigrants, who brought with them the tradition of Osterhase or Oschter Haws. He was a hare (an animal similar to a rabbit) who decided whether children had been good or bad at the start of Easter. He carried colored eggs in a basket and hid eggs in the grass. The Osterhase was first mentioned in a book about Easter eggs in 1682 by the German doctor Georg Franck von Franckenau. He also mentioned that some children would build nests hoping that the Osterhase would leave some eggs in the nest!

Easter occurs at the beginning of spring, and spring is a time of renewal. Nature is reborn after a long, cold winter. Flowers begin to grow in the gardens and animals wake up from their long hibernation. Rabbits are often considered a symbol of spring, and were often seen as an ancient symbol of fertility and new life because because of their ability to produce so many baby rabbits!

It is a bit strange that the Easter Bunny brings eggs, because baby rabbits don’t come from eggs!

Decorating eggs at the beginning of spring has been a long tradition throughout the world. Early Christians painted eggs red in memory of the blood that Christ lost when he was crucified. The early Christian Church accepted this practice and considered the painted eggs as a symbol of Jesus’ empty tomb after his resurrection.

So decorating eggs, as well as egg hunts or egg rolling are all popular Easter activities. Egg rolling is a tradition from England and Germany. The biggest egg rolling event takes place at the White House every year on Easter Monday. It’s a race where kids use a large spoon to push the eggs across the lawn for some reason. During an Egg hunt, kids have to search for hidden eggs.

While children are asleep on the Saturday night before Easter, the Easter bunny sneaks in their houses and hides eggs, chocolates, and candies all over the house. Children sometimes leave out carrots for the Easter bunny in case he gets hungry. When the kids wake up on Easter Sunday, they run around the house looking for all the chocolate.

So that is the story of how and why we started celebrating Easter in Canada and America. Easter Sunday is the main day of celebration, but in Canada Good Friday (the Friday before Easter) is the official public holiday where everyone has the day off from work and most businesses are closed.