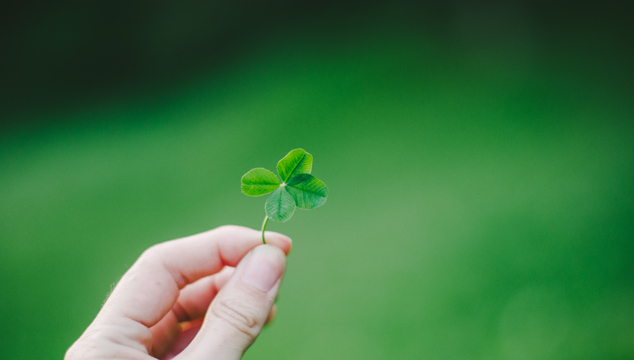 St Patrick’s Day is a fun day in Canada and the US. It’s not a public holiday so nobody has the day off from work, but it’s a day that many people celebrate. It’s a day to pretend that you are Irish! People wear green clothes and St Patrick’s day accessories like leprechaun hats or anything with shamrocks. People drink Irish beer, dance to Irish music and try to have as much fun as possible! In Chicago there is a big parade and the Chicago river is dyed green. McDonald’s sells green, mint-flavored milkshakes!

Leprechauns? Shamrocks? Are those English words? Yes, but they are specific things from Irish culture. A leprechaun /ˈlɛprəˌkɑːn/ is an Irish fairy, which is an imaginary creature. He is a small mischievous man who has a long beard and wears a green hat, a green coat, and green pants. People believe that leprechauns have magic powers! You can find him with a pot of gold at the end of a rainbow. The green plant in the photo at the top of this lesson is a clover. It has four leaves (it’s a four-leaf clover), but most clovers have three leaves. This is also called a shamrock. It’s the symbol of Ireland.

Who was St. Patrick?

St. Patrick was a real person. He is the patron saint of Ireland. (A patron saint is a Catholic saint who is believed to be the protector of a country or a group of people.) No one knows the exact date when he was born, but it is believed that he lived in the 5th century and died on March 17, the day now celebrated as his feast day.

He was born in Britain, but when he was 16 years old he was captured and taken to Ireland. He was kept as a slave for 6 years. He became a Christian while he was a slave. He escaped after he believed God had spoken to him and told him it was time to leave. When he arrived in England, an angel appeared in his dream and told him to return to Ireland as a missionary.

He became a priest and returned to Ireland to convert the people to Christianity. Although there were already a small number of Christians when he arrived, many people believe he is responsible for introducing Christianity to Ireland. He used the shamrock, or three-leaf clover, to explain the Holy Trinity: the Father (God), the Son (Jesus), and the Holy Spirit.

Why do you celebrate St. Patrick’s Day in North America?

Do you celebrate St. Patrick’s Day in your country?