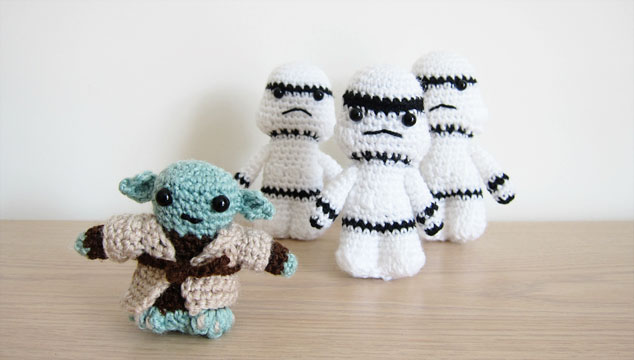 Listen to a story about my new hobby!

You’ll also learn how the words “how to” become the sound /haʊt̬ə/ in fast, natural spoken English.

I spend a lot of time at a craft store in my town because I’m really into scrapbooking. One day I was wandering around the aisles when I spotted what I thought was the greatest thing ever: A Star Wars crochet kit. It was in a box, and it included a book that explained how to crochet 12 mini-Star Wars characters. It also included a crochet hook and all the yarn & filling needed to make two of the characters. I didn’t actually know how to crochet, but I really wanted to learn because these Star Wars characters were so cute!

Crocheting is a craft. You make things by using yarn and a special hook. You create stitches and join them together to make things like blankets, hats, scarves, or cute Star Wars characters. The book in the kit contains patterns. A pattern tells you how many stitches and what kind of stitches you need to make to complete each character.

Crocheting requires patience, but it’s relaxing. Sometimes I can spend an hour working on one character. Of course, my eyes are blurry afterward because the stitches are really small, but that goes away eventually. My other problem is that I pull the stitches apart and start over again if I’m not satisfied with my work. It takes me a long time to finish one character, but I really enjoy crocheting!

HOW THE WORDS HOW TO BECOME THE SOUND /haʊt̬ə/ IN FAST, NATURAL SPOKEN ENGLISH

It’s important to know how to say this sound so you can also hear this sound.

Listen to these sentences from the story:

I didn’t actually know how to crochet, but I really wanted to learn …

Did you hear the words how or to in those sentences? There are two things that happen when how is followed by the preposition to. In fast, natural speech, the two words are combined and reduced to the sound /haʊt̬ə/.

The preposition to is a function word. It’s a grammar word. In needs to be in the sentence to make the sentence grammatically correct, but it’s not an important word. In fast, natural speech, the vowel O is reduced to the schwa sound /ə/, and to is pronounced /tə/.

When the letter T is between two vowel sounds and it’s at the beginning of an unstressed syllable, it becomes the alveolar flap sound, which is also called flap T, tap T, flapped T or tapped T.

Learn more: Episode 24: How to pronounced the American T sound

It’s not a fully pronounced T sound, but it’s not a D sound either, as many students think it is.

Your tongue doesn’t stop in the middle of the sound as it normally does with a fully pronounced T sound. There is also no release of air after the T. It’s a quick tongue tap.

How and to are not always pronounced /haʊt̬ə/. You will hear American English speakers say both /haʊ tu/ and /haʊ tə/

In fact, I said /haʊ tu/ in the story in this sentence:

I learned how to crochet by watching how-to /haʊ tu/ videos on YouTube.

In that sentence I used how-to as an adjective to describe the kind of videos I watched on YouTube.