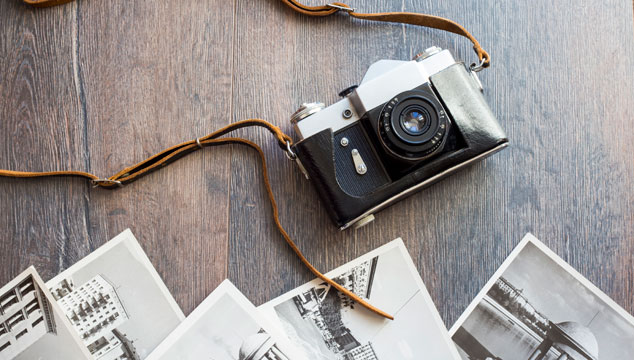 Listen to a story about looking for an important photo!

You’ll also learn how to say “photograph,” “photography,” and “photographer,” and how to pronounce the American T sound.

We love photos in my family. My mom has a huge collection of family photos, starting with photos taken in the 1950s. The most important photos are the ones of family members who have passed away. My mom has a really nice photo of me and my brother with my maternal grandmother, who passed away in 2000. My mom kept the photo in a frame on her desk, but it had been in the frame so long that it was stuck to the glass. She wanted to put the photo in a new frame, but she couldn’t remove it from the old frame without tearing it. She needed a new copy of this photo.

We left no stone unturned looking for a copy of this photo. My mom and I went through every photo album we have looking for a copy of it or a similar photo taken at the same time. We found … nothing. We asked multiple people in my family if they took the photo, including my aunt, my cousin, and my brother’s girlfriend at the time. None of them remembered this photo, and they all said they didn’t take it. I tried taking a photo of the photo and the glass together, but the quality wasn’t very good.

We didn’t have a digital camera in 2000, so we know the photo was taken with a film camera. I looked through my mom’s giant box of negatives, which sounds easier than it was! The negatives are so small that it was hard to see the images. Again, I found nothing. I bought a scanner so I could start digitizing all the negatives. This is our last option. If I can’t find the photo after digitizing all the negatives, we may have to give up on ever finding this photo, unless a miracle happens and someone else discovers they have it!

PART ONE: HOW TO SAY PHOTOGRAPH AND THE AMERICAN TAP T SOUND

The first syllable in the word photograph is the stressed syllable. It’s said louder and longer than the other syllables and the vowel sound is fully pronounced: /foʊ/

This sound has many names. The proper name is the alveolar tap or flap. It’s also called the flap T, tap T, flapped T or tapped T.

Your tongue doesn’t stop in the middle of the sound as it normally does with a fully pronounced T sound. There is also no release or puff of air after the T. It’s a quick tongue tap.

In the word photo, the second O is fully pronounced: /’foʊt̬oʊ/

However, the second O in photograph is reduced and it becomes the schwa sound /ə/: /’foʊt̬ə/

The final syllable -graph is an unstressed syllable, but it’s not reduced so it keeps the full vowel sound: /’foʊt̬əˌgræf/

PART TWO: HOW TO SAY PHOTOGRAPHY AND PHOTOGRAPHER
Now, just to confuse you, the words photography and photographer are pronounced completely differently from photograph.

In the words photography and photographer, the first syllable is unstressed and reduced, so the vowel sound is pronounced /ə/: /fə/

The second syllable is the stressed syllable. This T is not the tap T sound. It is the regular, fully pronounced T sound. The vowel sound is /ɑ/: /fə’tɑ/

Now, both photography and photographer look like they contain the word -graph, like photograph, but -graph is divided into two syllables.

The third syllable is unstressed and reduced, so there is another schwa sound /ə/: /fə’tɑgrə/